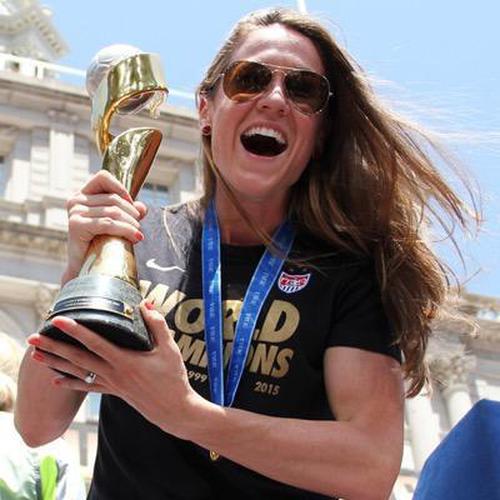 Heather O’Reilly grew up in East Brunswick, NJ, and was immediately introduced to sports and competition by her three older brothers. Although her natural athletic ability was seen early on, she credits her family for instilling in her a high level of competitiveness and self-discipline.

She took those attributes and ran with them, successfully making her way up the soccer ranks through the soccer club system in NJ and the NJ Olympic Development Program. This led O’Reilly to a platform of representing her country at the youth national team level, winning the inaugural Under-19 World Cup. Shining in the tournament, Heather was given an opportunity to bring her speed, tenacity, and attacking ability to the US Women’s National Team.

In 2002, at the young age of 17, Heather earned her first cap with the National Team. In 2004, her soccer dreams became a reality by being named the youngest member of the 2004 Olympic Team, which allowed O’Reilly to compete alongside household soccer names such as Mia Hamm, Brandi Chastain, Julie Foudy, and Kristine Lilly. O’Reilly proved that she not only could survive but also thrive at that level. One of her greatest accomplishments is scoring the game-winner in the semi-finals of the 2004 Olympics, sending the USWNT into the final, which they went on to win.

From 2003-2006, O'Reilly played for the prestigious soccer powerhouse UNC under the watchful eye of coaching legend Anson Dorrance, winning two national championships with the program and having the honor of her jersey retired.

For nearly 15 years, O'Reilly was a consistent contributor to the U.S. Women's National Team. From 2002-2016, she suited up for her country 231 times, scoring 47 goals with 55 assists. After representing her country in three Olympic Games, and three World Cups, O'Reilly retired from international play on September 15, 2016, in an emotional farewell match against Thailand in which she walked off the field to a standing ovation from her teammates and fans. O'Reilly continues to compete in professional club environments.