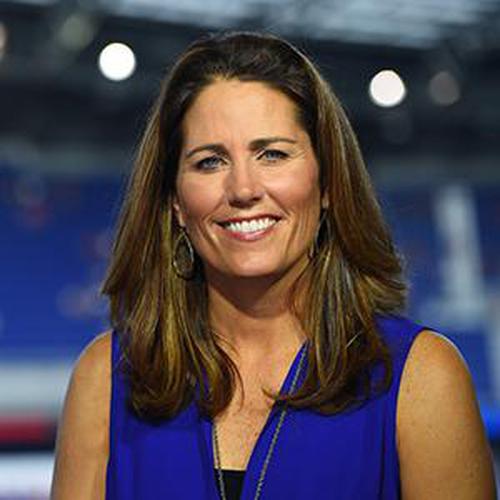 Julie Foudy had a sensational soccer career while playing on the USA National Team for 17 years.

She is the former Captain of the US Women's National Team and was a captain for 13 of her 17 years with the team. Julie participated in four Women's World Cups and three Olympics for Team USA. She is a two-time World Cup Champion, and she is also a 1996 Olympic Gold medalist, 2000 Olympic Silver medalist, and 2004 Olympic Gold medalist.

Julie finished her National Team career with 45 goals, 59 assists, and 273 international appearances (caps) for the USA. Her 273 caps rank fourth in the world all-time, male or female. Julie also played all three years as Captain with the WUSA's San Diego Spirit. She was a four-time All-American at Stanford University and inducted into the Stanford Hall of Fame. In 2015, Julie was named the Pac-12 Player of the Century.

What's most important to Julie is to make a difference off the field as well. She was accepted into Stanford University's Medical School but decided not to pursue a career in medicine. Julie was the President of the Women's Sports Foundation from 2000-2002. She served on the Women's Sports Foundation Board of Directors for seven years and was a WSF advocacy consultant for two years, with a focus on Title IX, childhood obesity, and athletes' rights issues.

Julie also served on the Board of Directors for the WUSA (the professional women's soccer league) as the Player Representative. She currently sits on the board of Athletes for Hope (AFH), a 501 (c)(3) charitable organization created by successful athletes who have a deep commitment to charitable and community causes. Julie is an espnW Advisory Board Member, a Positive Coaching Alliance advisory Board Member, a Steel Sports Inc advisory Board Member, and served as a global spokeswoman for Global Girl Media, a non-profit helping young women around the world find their voice through journalism.

Julie also has been instrumental in several women's rights and child labor issues around the world. The world governing body of soccer, FIFA, awarded her the FIFA Fair Play Award, making her the first woman, and American, to receive the honor for her work against child labor in the stitching of soccer balls.

Julie was nominated by President Bush and Secretary Paige to serve as a member of the Commission on Title IX and has been honored numerous times for her work on behalf of Title IX. She received an Honorary Doctorate of Law degree from Smith College in 2005 and was honored by the National Women's Law Center.

Julie was named as one of the "100 Most Influential NCAA Student-Athletes." The NCAA defines the 100 Most Influential Student-Athletes as those who have made a significant impact or major contributions to society. In 2018, Julie also received the prestigious NCAA Silver Anniversary Award in recognition of her collegiate and professional achievements.

Julie was inducted in the US National Soccer Hall of Fame in 2007, alongside longtime teammate and friend, Mia Hamm. Julie and Mia were only the 6th and 7th women ever to be inducted into the Hall of Fame and the first and only ALL FEMALE induction class.

Julie founded the Julie Foudy Sports Leadership Academy (JFSLA) in 2006, along with her husband, Ian Sawyers. The JFSLA is a unique residential camp experience that uses sports as a vehicle to teach leadership skills for life. In 2006, Julie also founded the Julie Foudy Leadership Foundation (JFLF), a non-profit, 510(c)3 public charity. The Julie Foudy Leadership Foundation's mission is: Building on a foundation of sports and fitness, we empower young women from all socioeconomic backgrounds to become leaders who positively impact their communities.

In 2013, she produced and narrated a documentary for ESPN Films called 'The 99ers'. Using footage shot by Julie during the US team's journey to win the Women's World Cup in 1999, 'The 99ers' is a behind-the-scenes glimpse at that historical event.

Julie wrote a book for teenage girls and young women on leadership, titled Choose to Matter: Being Courageously and Fabulously YOU. The book was published by Disney and espnW and released in May of 2017.

She is an Edward R. Murrow Award-winning reporter and analyst for ESPN/ABC, and a contributor and writer for espnW. Foudy launched her ESPN podcast "Laughter Permitted with Julie Foudy" in March of 2019 and it is the top-ranked podcast focusing on women in Sports on Apple Podcasts. Julie has interviewed trailblazing women such as Billie Jean King, Simone Biles, Mia Hamm, Robin Roberts, and Katie Couric, to name a few. By May of 2020, with just 35 episodes available, Laughter Permitted had already been downloaded over one million times. Laughter Permitted is a fun, thoughtful, candid conversation with trailblazers in sports about the joy/chaos of life and sports. Laughter -- and donuts -- permitted.

Julie is a founding co-owner of the female majority-owned and operated new women's professional soccer team in Los Angeles, called Angel City, set to begin to play in the NWSL in 2022. Julie is also director of her Julie Foudy Sports Leadership Academies and Julie Foudy Leadership Foundation, a motivational speaker, proud mother of two children, Izzy and Declan, and the best chocolate-chip pancake maker in the entire universe (source: Izzy and Dec).